Saltwater Dog™ is our newest brand.  This brand was inspired by two dogs, Haole, and Nikki.  Here are their stories.

HAOLE
Haole is our official surf dog.  He’s a beautiful yellow Lab that resides in Ventura, California with his parents John and Kim Murphy and little dog-brother Primo.  We “met” Haole two or three years ago on Instagram.  One day his mom posted a photo of his new surf board.  We took that opportunity to say he needed to have Saltwater Raised® stickers and decals for the new board.  She agreed, we supplied him with stickers and decals and became one of his sponsors and have had a great relationship with them since then.

He’s a well-known surf dog competing and winning in such contests as the Purina ProPlan Incredible Dog Challenge, the Surf City Surf Dog Competition, and many others. He’s also the official “Ambassadog” of Ventura, CA, and recognized as a Canine Good Citizen.  His greatest passion is his involvement with the A Walk on Water organization which provides water therapy through guided surf instruction to specials needs children.

Haole didn’t really learn how to surf, rather he “told” his dad he wanted to surf.  One day while his dad John was surfing Haole focused on him, hopped into the water and tried to get on his board.  John got him on it and slowly worked with him until he was actually surfing on his own.  Yes, on his own.  From an early age Haole would ride in the back of the family’s golf cart standing up and they think this is where he learned about shifting his weight, balance, leaning, all things you need in surfing.  He even knows to lean back on the board to pull up the nose in order to get a smoother landing onto the beach.  Pretty incredible for a dog!

Haole has his own social media accounts with lots of followers.  You can find him on Facebook, Instagram, and Twitter.  Give him a follow, you’ll grow to love him as much as we do. 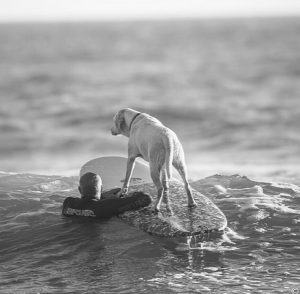 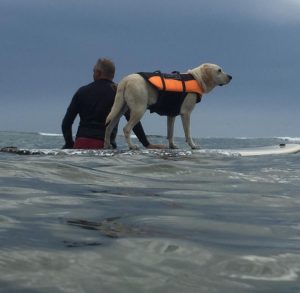 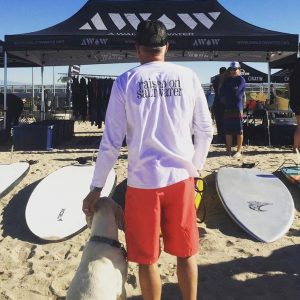 NIKKI
Nikki is our official local Saltwater Dog™.  Nikki is a beautiful, spoiled, two-and-a-half year old rescued Pit-Boxer mix.  She works with her dad David “Clammerhead” Cessna at his business Sandbar Oyster Company.  This dog LOVES the water, but more than anything else she loves to chase boats. Her daddy, Clammerhead Cessna, says “Yes, she does have gills…”  So, if you are in your boat on the Newport River near their sandbar and you see a dog chasing your boat, don’t worry, it’s just Nikki.  If she catches you just give her a pat on the head, tell her “good girl” and send her back to the sandbar.  She’s a good dog and we love her! 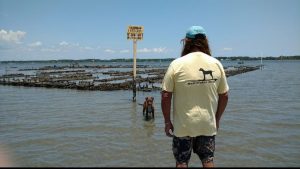 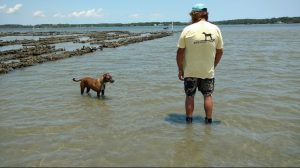 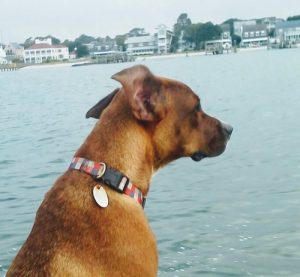 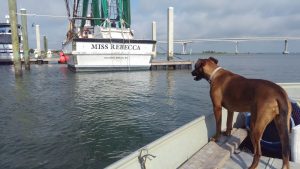 The response to Saltwater Dog™ has been overwhelming since its launch in June and we thank you for that.